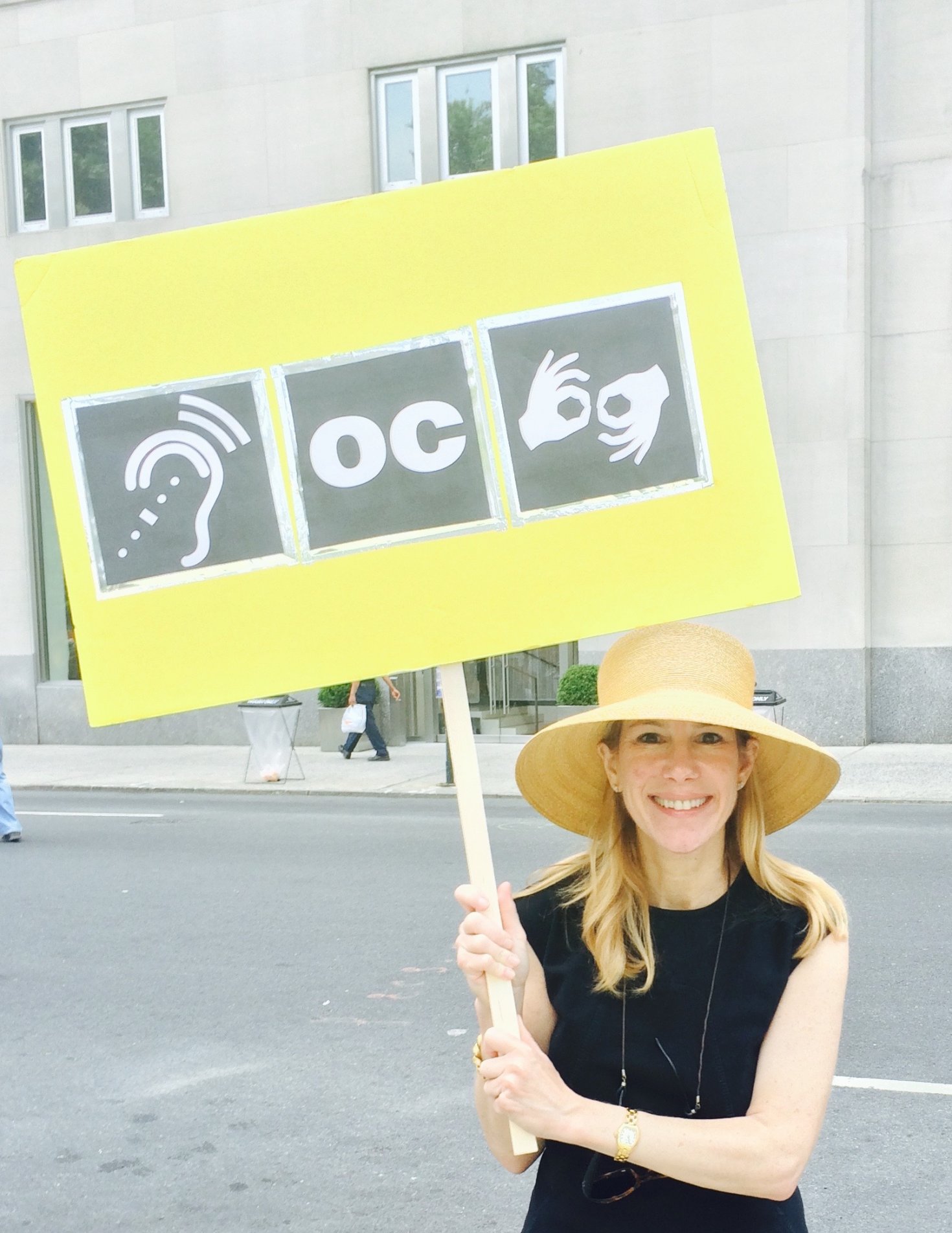 The LGBT community uses initials for all the individual groups to form the name and a rainbow to reflect the diversity of the group. They didn’t select one segment to represent the entire community. Likewise, the Hispanic or Latino community didn’t choose one country to represent all the nationalities. Why is the wheelchair symbol used to represent people with hearing loss, visual impairments, and cognitive disabilities? It reinforces the misconception that the only disability of consequence is the one requiring physical access.

Part of the problem is that hearing loss isn’t perceived as a “real” disability. Hearing aids, unlike wheelchairs, are mostly inconspicuous, so hearing loss is an invisible disability. Even the means of access are seldom seen--they are a bunch of wires or a small captioning device, whereas ramps are highly visible. As a result, hearing loss access needs are often overlooked.

The US Access Board develops ADA guidelines for the built environment, and these guidelines form the basis for the Department of Justice (DOJ) ADA Standards. DOJ also oversees other aspects of the ADA, including programmatic access, auxiliary aids and services, and effective communication.

Places of public accommodation often have no idea what they should or shouldn’t implement for communication. Physical access is clear—build something this high and this wide. In comparison, spelling out what “effective communication” is fuzzy. Who decides what is effective or not? Determining this can require filing complaints and/or litigation. The reason? Despite DOJ being the enforcement agency overseeing compliance, the process is primarily complaint driven. While the health department in various cities cites restaurants for violations, DOJ is not driving around and checking for ADA compliance in a similar fashion. The burden therefore shifts primarily to the people who need the protection, and there are few if any penalties for lack of compliance.

Both the Access Board and DOJ are able to form Federal Advisory Committees to help them with rule making, but only the Access Board does. Therefore, people with or parents of children with hearing loss are not inherently involved in developing DOJ rules.

The lack of clarity concerning “effective communication” permits companies to develop hearing access equipment that may not have the best interests of people with hearing loss in mind. Some are selling handheld captioning devices for watching films or live theater. It is well known that people cannot drive and text simultaneously because their eyes can only see one place at a time, so it seems incomprehensible that museums, theaters or entertainment venues expect people with hearing loss to watch two places at one time.

Businesses can provide substandard communication access, such as note writing, as long as the meaning gets transmitted. A major coffee corporation refused to provide hearing induction loops for hearing access at its counters and then rolled out a campaign to discuss race relations, failing to recognize that discrimination does not only involve race. In contrast, a bank decided to pilot hearing induction loops in New York City so customers with hearing loss could hear at the teller window and service desk and in the conference room; the bank is now expanding the program to all renovated and new locations. Two different companies have two different definitions of effective communication for people with hearing loss, who are thus reliant on companies to do the right thing.

Although state and local governments are covered by the ADA, federal government agencies are covered instead by section 504 of the Rehabilitation Act, which was the model for the ADA. Even among federal agencies there is a discrepancy in what is provided. The US National Park Service’s Guidelines require hearing induction loops at its service desks and videos; the US Holocaust Memorial Museum (which is a quasi-federal agency) added them to its videos; and the Pentagon required the Intrepid to add induction loops to its space shuttle exhibit in order to receive the shuttle. Yet, the Smithsonian Institution (another quasi-federal agency) refuses to add hearing induction loops to its videos. Different federal agencies have conflicting definitions of effective communication.

There should be ONE central place to file complaints for lack of ADA compliance. The burden should shift to the government to determine which agency is responsible for addressing the lack of access and not the person seeking the accommodation. The Access Board should have full oversight for drafting standards for all access whether built in or programmatic. This will eliminate the loopholes. The DOJ’s role should be strictly enforcement. The ADA should clarify that effective communication for people with hearing loss means full spectrum including audible, visual AND qualified interpretation. There should be vigorous enforcement for lack of compliance. Advisory committees should be convened to provide clarity about what people with hearing loss need.

Otherwise, the promises of the ADA and Section 504 of the Rehabilitation Act will remain aspirations rather than becoming a reality. People with hearing loss deserve to have this clarity and access, which is the intention of the ADA and the mandate it was meant to be.